Another monster for this week, the Bad Sector.  I am experimenting a bit with sort of a hazard monster rather than a traditional monster.  Sort of along the lines of the Dream Sallow or the Weaponized Meme from Numenera. 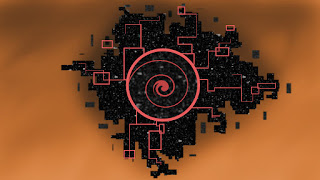 Level: 4
Motive: None
Environment: Unmaintained Clusters
Health: 12
Damage Inflicted: 4
Movement: Special (See Combat)
Combat: A bad sector is usually hidden at first and strikes unaware. Any program that starts its turn within an immediate distance to the bad sector is subject to a level 6 attack that deals 2 intellect damage.
Any time the bad sector is attacked and is dealt damage, the sector jumps to within an immediate distance from the attacker and makes an attack against the attacker.
Interaction: A bad sector is usually the source of corruption on the disc. Corrupted clusters are hazardous enough as it is, but the sector if repaired can restore functionality to the system.
Use: The PCs are sent on a mission to investigate rumors of corruption in a data warehouse. a few maintenance programs have been picked up glitches and their assignment is the only thing that ties them together.
Loot: Cleaning up a bad sector reveals 2-3 cyphers or 1 artifact.
Posted by Josiah Bradbury at 8:35 AM 1 comment:


Just a small creature today, still working on the other foci, hopefully i'll get another one out for next week!

-Josiah, a Twisted Spinner who Wheels and Deals

Glitches generally are just normal everyday programs that were either created with their schism or were corrupted by other malware. Now they live with the knowledge that if exposed they will be queued up for reformatting.

Level: 2
Motive: Survival
Environment: Anywhere on The Disk
Health: 6
Damage Inflicted: 2
Movement: Short
Modifications: Defends as a level 4.
Combat: Glitches generally are improvised fighters, but when they have to they are erratic and unpredictable. Due to their corrupted nature, any touch attack inflicts 2 points of might damage upon the attacker when the corruption affects the attacker.
Interaction: Anyone could be a glitch, most hide it well. Normally they interact just like everyone else, but if they are exposed they might become violent.
Use: If a PC causes a disruption in a large group of programs they could be outed. The Glitch might become hostile or try to escape, depending on the PCs disposition towards glitches they might pursue. Glitches are also known to congregate once they have been outed and can be encountered in groups of 3-5.
Loot: A destroyed glitch can leave behind 1 or 2 cyphers, most likely the source of their corruption.
Posted by Josiah Bradbury at 5:44 AM No comments:

This week's entry in the Tron-like setting, a descriptor.  It's been posted to G+ before, but I've tweaked it a bit and I think this is close to the finished product.

-Josiah a Derelict Jack who Explores the Dark

You are naturally gifted in getting a lot of things done. People around you might call you distracted, even squirrelly, but you know better. They are just jealous of your abilities.

Quick and Smart: Add 2 to each your speed and intellect pools.

Multitasking: You take no penalties for distractions, you can always take on another line of thought.

Skill: Your mind is a chaotic place, you are trained in resisting mind effecting abilities because it's hard to understand how you think.

Inability: Your nature makes you hard to relate to, social interactions for you are increased by one step.

Initial link to the starting adventure:

Posted by Josiah Bradbury at 7:16 AM No comments:

Focus: Writes to the command line.

This is the first post in a series for a Tron-like setting. If you like it, let me know!

-Josiah: A Twisted Spinner who Plays hard to get.

Writes to the Command Line

Most programs and users are unaware of the hidden interface that underlies the entire world. But you have access to this secret way into the system.

Now with these skills you are often sought after to fix issues, some of them are legitimate, correcting corrupted code, or running queries for people. But often these jobs might be illegal, stealing encryption keys, corrupting systems, assassinating programs, etc. Life is an adventure for you because you can see the command line.

Connection: If this is your starting focus, choose one of the following connections.


Minor Effect Suggestion: You regain a number of intellect points equal to your tier + 1.

Major Effect Suggestion: You are able to create or use one of your console actions in addition to your current action.

Suggested GM Intrusion: Your console fizzles out, have you been hacked? Did the firewall kill your connection?

Tier 1
Console Access (1 Intellect Point). You have access to the console wherever you go, all you need is a flat surface about the size of your palm. This gives you access to objects or creatures within an immediate distance. This doesn't give you control of these things, but rather just access to their labels and any unencrypted actions it may have. Example: Opening an unlocked door, turning on a screen, etc... You may attempt encrypted actions but the difficulty is determined by the GM. Action.

Tier 2
GREP (2 intellect Points). You send a query searching for a pattern and will receive results back on objects of creatures within your consoles range. For example, you can search: "All level 3 creatures", "Object type: weapon", "Doors".
The GM may require a roll depending on the level of encryption of the information. Action

Tier 3
Improved Console (3 Intellect Points). You can create an improved version of your basic console, the abilities remain the same except now the range is increased to short.  Action

1337 Skillz. Choose one of the following skills that you have no training in to become trained with: Hacking, Data Mining, or Programming. Enabler

Tier 4
Format (4 intellect points). You can make an attack against any creature or object within reach of your console. On a success, you deal 6 points of damage. In addition, if the target is a creature and is unaware of you this attack will ignore armor.
If you destroy a creature with this attack, you can instead recreate it with a neutral disposition to you.  Action

Tier 5
Superior Console (6 Intellect Points). You can create a superior version of your basic console, the abilities remain the same except now the range is increased to long. Action

1337 Hax. Choose one of the following skills even if you have training in it to become trained or specialized with: Hacking, Data Mining, or Programming. Enabler

Tier 6
CRON (3+ Intellect Points). You are able to set up a schedule for one of your abilities paying the full cost of the ability plus this one. This ability can be attached to a Location, Object, or Creature within the range of your console. In addition, it can be set to activate on either a timed basis or when a specific event trigger. Action
Posted by Josiah Bradbury at 11:35 AM 3 comments:

Stepping out into the Blogosphere.

The beginning of the story of two RPG players, who turned bloggers.  But also who stayed RPG players.

Josiah:
Well. This is interesting, to say the least.  I have been bouncing this idea around for quite some time, I've posted things to google plus, cyphercast hub, and Reddit.  But never really had anywhere to call my own. This blog will be mostly focused on Cypher System by Monte Cook games, but will most likely contain all sorts of RPG goodness.

To introduce myself, I am Josiah, I am mostly a DM but I have on occasion played a few games, but mostly I love to run games and would like to share that passion with the world.  I plan on working on a lot of character options and settings as they come to me.  Who knows?  Maybe I'll start taking requests.

William:
I got my start in RPGs back in the mid-80s. All of my friends were playing D&D, but I couldn't, because Satan. Instead, I started with Traveler. I had to be the GM, since no one else knew anything about it. That has been something of a trend through the years. As a result, I'm one of those weirdos that actually enjoys GMing more than playing.

Around 2010, I made a conscious decision to change the way I approached GMing. I threw out all of the heavy, clunky games, and began focusing on lighter, narrative games. Numenera was a perfect fit when it came along, and I was hooked. Most of my gaming these days is cypher related. I'll play other things, and occasionally run them, but I always come back to the one I know best.

- William, An Impulsive Speaker who Struggles with Words


Posted by Josiah Bradbury at 9:12 AM No comments: